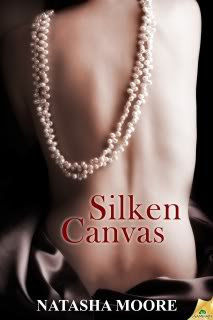 When Ashley runs into Brendan at an art gallery, their attraction is as
hot as ever.
Though she swore to never again take second place to his art, she finds
herself agreeing to an impromptu photo shoot. Once in front of his
lens, five long years of suppressing her kinky side melt away—and shakes
her resolve to keep it strictly business.

One spellbinding
session after another makes it impossible to resist talking of fantasies
and long-buried desires. But once the images hit the gallery walls, all
the fears and insecurities that drove them apart create a rift wide
enough for danger to find its way in…

Excerpt:
Mine.
Ashley might not want a future with him, but she was his
right now. His to command. His to touch. “Let’s go. You’re here to work,
remember?” He pulled her across the living room and into the studio, then
slammed the door behind them. Ashley stopped in the middle of the floor and
turned around to look at him. He recognized arousal mixed with the confusion on
her face.
“Brendan…”
“No talking,” he snapped. “We’re working now.” The last
thing he needed was to hear about Stuart. Why was she considering going back to
him? Did those kisses last night mean nothing to her? Time to wipe that jerk
out of her mind.
“Strip.” He leaned back against the table and hoped he
looked more indifferent than he felt as he watched her. She stared at him for a
moment, then licked her lips before she slowly stripped off her T-shirt and
revealed her amazing breasts. God, they were gorgeous, full and firm, nipples
tight and dark. His fingers curled so tightly into his palms they hurt. She
bent over to pull her jeans off, revealing those long, shapely legs and plain
white panties. He stared at her until she removed the panties too.
Brendan let her stand there after she was completely naked,
looking a little uncomfortable, more than a little aroused. Good. He didn’t say a word as he
contemplated today’s session.
Bondage.
His body hardened as he planned binding Ashley the way he’d
always liked to. It had been way too long. No fanciful red ribbons today. No
pop beads that could come apart with the slightest pressure. She wasn’t going
to be able get away from him this time.
He strode to the storage closet in the corner. In his New York studio, he had
more props, a brass bed and hooks and other gear. But there was plenty he could
do with the supplies he had here.
Brendan grabbed a couple lengths of rope off a hook on the
wall and turned to Ashley. He braced himself against the burst of emotions he
could no longer ignore. The previous shoots had been foreplay. They’d all been
leading up to this.
“Remember this rope?” He ran the coil along her arm and saw
her shiver. “Soft. Black. It was your favorite. Or have you forgotten?”
“I haven’t forgotten,” she whispered, her eyes focused on the
coil of rope looped in his hand.
“Good. Put your hands behind your back.”

I have started reading this story, but was unable to finish it prior to this blog posting.   All I can say is if the first four chapters are any indication of how steamy this story is, I will be in trouble!!  Review to be posted once I finish the story!