Welcome to another spotlight on a Western NY author! This week we’re featuring Cassandra Carr, whose newest release, On Display, came out a couple of days ago. Here’s some information about it: 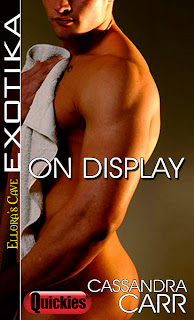 Hunter wants Olivia, and the feeling is mutual. She decides to take her secret attraction public and show up at the club where he’s bouncing, ready to lay everything on the line to snag him. Hunter can’t believe his luck, and soon makes his own move on the woman he’s lusted after for months. Things heat up between them during an exciting—and exhibitionist—evening that leaves them both anticipating more sexy times to come.
An Exotika® contemporary erotica story from Ellora’s Cave

How about an excerpt?

Shit, where did he go?

Olivia jumped and a large hand shot out to steady her with a solid grip to her waist. She looked up. Hunter. “You scared me.”

“You were hot before that.” A shocked expression flitted over his face before he looked down and coughed. Olivia had to fight a laugh.

He shifted his weight, crossing his arms over his chest, and she had to suppress the urge to drool. The man was beautiful. There was no other way to describe him. Olivia loved his hair. It was thick and wavy and when it was down it hung to his shoulders. His face was angular as if he had some Native American ancestry and his chocolate-brown eyes could be either intense or full of mirth, depending on his mood. She’d spent more than one night with her Hitachi Magic Wand, imagining his full lips skating over her heated skin.

That same skin was definitely warm now. If she’d thought dancing had made her sweat, this was torture. How was a woman expected to just sit there and let hotness like Hunter go unexplored?

“Do you, um,” Hunter gestured toward the back of the club, “want to get some air?” Her eyebrows drew down. There was no exit that way. Clearing his throat and sending her a smile, he continued. “There’s a patio no one uses on a night like tonight when it’s so freaking hot. It was a smoking patio, now Vince uses it for private parties and stuff.” Hunter looked away and then back at her. He was babbling. It was adorable and sexy all at the same time.

“Sure, that sounds good. Can’t be any hotter than it is in here.”

He laughed. Dimples. I’m a dead woman. “Yeah, it’s like an oven, isn’t it? The air-conditioning is no match for all the people.”

She attempted to hop off her barstool without flashing him and realized he’d never let her waist go. His other hand joined in the act and he brought her gracefully to the floor. “Thanks.” He was dangerously close and Olivia hoped like hell she’d have the courage to make it known how much she wanted him. Maybe he’d make it unnecessary.

He placed a hand on her back right above the swell of her ass and guided her through the crowd and toward a dimly lit hallway. As Hunter leaned in, his breath fanned over her ear. Olivia shivered. “We don’t keep the lights on anymore. It discourages people from coming back here now that there’s nowhere for them to go.”

Olivia nodded mutely and Hunter guided her farther into the recesses of the hallway until they came to a door, which he pushed open and held for her.

She took a few seconds to assess her surroundings. “Wow, this is really nice.”

He closed the door behind them. “Yeah, now that the smoke smell is finally getting better and Vince added some crap customers like, it’s not bad.”

Her hand shot up to cover her mouth after a laugh tumbled out. Hunter grinned and those dimples made another appearance. “I’m sorry.”

“About what? Laughing at me?”

“You know what I mean.” He gestured to the various potted plants scattered throughout the area and the grill in the corner. “Customers love the trees with the little white lights, no matter how boring and common they are now. And the grill? I don’t remember the last time that was used, except at our employee party about eight months ago.”

He caressed her cheek. “You have no idea how gorgeous you look in the moonlight.”

She shook her head with a chuckle. “That’s quite a line.”

“Not a line. The truth.” Before she could comment further, he’d moved his hand to the back of her neck and brought her face to his. “I need to kiss you.”

Their lips met and Olivia moaned. As if that was the sign he was looking for, Hunter snaked his other arm around her waist and pulled her flush against him, sliding a thick thigh between her legs as he deepened the kiss. His tongue demanded entrance to her mouth, and with a sigh, she opened to him. Hunter wasted no time, pushing inside and exploring her depths. Her tongue chased his when he retreated and he groaned.

Even if they went no further she’d have fodder for hundreds of nights of fantasies. Oh, could the man kiss. He put his entire body into it, slowly stoking the fire inside her. Finally they came up for air, both panting.

He leaned back a little more and fixed a heated stare on her. “I’m on break with about twenty minutes left. I need you.”

She couldn’t deny him. Hell, she didn’t want to. “Then take me.”

What do you think? Pretty hot, right?

If this type of story isn’t up your alley, she has lots more! To make it easy, Cassandra created a PDF file with her entire book list. You can find it here: http://booksbycassandracarr.com/Printable%20Book%20List%20for%20Cassandra%20Carr.pdf

Thanks Cassandra for promoting this story on my blog.  I am honored to be part of your street team, so I was able to read it about a week before it was released.   So this is a VERY short story, but damn, it sucks you in quickly.  Talk about turning up the heat?   Boy did I need to shower after reading this hot little story.  Hell, Cassandra gave you all a great excerpt that is just the beginning of the steaminess.

I enjoyed reading these two characters build up the tension, release the tension and then build it up again.  The sexting was hot!  All I can say is read this!  Okay and make sure you can take advantage of the steaminess!!