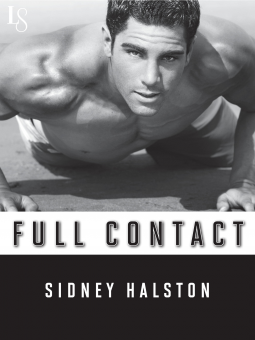 Sidney Halston returns to steamy Tarpon Springs, Florida, where a hell-raising bad boy prepares to get down and dirty for the woman he loves.
How could she have been so stupid? When Jessica Cross decides to give her violently jealous boyfriend—the otherwise influential and charming Dennis Stavros—a second chance, she very nearly becomes a statistic. After weeks of healing from a broken rib and collapsed lung, and with Dennis behind bars, Jessica finally feels ready to come out of hiding. But will she ever be able to take a chance on love again with someone new?
Mixed martial arts fighter Slade Martin knows he has a bad reputation. Hell, he’s probably earned it. So it won’t be easy to convince beautiful, vulnerable Jessica that she can trust him—that from the moment she walked into his life, she’s been the only one he’s wanted. Powerful and confident, Slade knows he can honor his vow to protect Jessica body and soul. Winning her heart will be another matter . . . but a woman like Jessica is worth the fight.
Praise for Sidney Halston’s Against the Cage
“Against the Cage is funny, steamy, scorching, and holy hot MMA fighter, I wanted more! Five stars all the way!”—New York Times and USA Today bestselling author Toni Aleo
“A steamy and fun romance that will leave readers begging for more! Sidney Halston is an author to watch!”—New York Times bestselling author Cherry Adair
“Halston’s new series opener creates an organic and sensual dynamic between Jack and Chrissy that makes an easy buy-in for readers. And if the story isn’t endearing enough, Jack’s feisty Chihuahua/pit bull mix will have readers instantly hooked and eagerly awaiting the second series installment.”—Library Journal
Includes a special message from the editor, as well as an excerpt from another Loveswept title.


I would first like to thank Random House, Loveswept and NetGalley for providing us with a copy so we can bring you this review.


OK… Where should I start? This is a great story, I liked how Slade changes his way of being for Jessica, but there were a few things I didn’t really like about him. I personally think he needed to do something about his anger management issues, especially at times when dealing with Jessica. Her past shows she hasn’t been through the easiest of relationships, and the fact that there were times he even intimidated me I was surprised not to see Jessica cringe away. Add to that his past dealings with women, I didn’t think there was much of a redeeming quality about him. But he does prove to be a great strength when needed.


Jessica was a nice character, strong and willing to get out of the negative situation she was in. What I didn’t really like about her was that she kind of gives in Dennis but stands up to Slade… To me it was a bit confusing on her character.


Now don’t get me wrong the story is actually very good and I enjoyed it over all. I liked that Jessica does finally stand up to not only Dennis but her parents as well. She has lots of support around her and she learns a few lessons along the way.


I would have to say that a few of the supporting characters caught me more than the main characters did. I can’t wait to know more about Cain and Violet as well as Frances and Tony. I look forward to more in the future from those characters.


I will give this story a four kiss rating.