He’s death for hire…
Some people measure life in hours. Days. Weeks. I measure mine in kills. A covert military mission gone wrong robbed me of my memory and any link to my past. This is my existence now. I execute and survive. Nothing more, nothing less. I was ready to write Isabel Foster’s name in my ledger of unfortunate souls until she uttered the one word that could stop the bullet meant for her. My name.
She knows my face. She knows me. She’s the key to the memories I’m not sure I want back. Now nothing is simple. I still have a job to do, and my soul isn’t worth saving. I’m not the man she thinks I am. I can’t love her. And sparing her life puts us both in the crosshairs.
https://www.facebook.com/groups/RedLedgerArmy/ 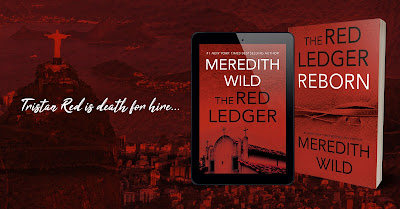 I have to say, The Red Ledger just might be my favorite Meredith Wild series yet. And we only  have the first book.

Wild has packed a little of everything in to the first of this promising new series, trills, mystery, suspense, and a hint of romance. A romance that actually sets the stage for the series. Not much is known about Tristan, by us or for himself, for that matter. He’s very Jason Bourne-esque with a Wild twist. To Isabel, he is the one that got away. The one that would forever hold her heart. And the one that can take her life if only he didn’t need her so much.

We only begin to scratch the surface of what is sure to be an action packed ride for these two. It’s a fairly quick read, but one that you must pay attention to every detail. There’s a lot of story in there. It’s a definite must read for those who like their suspense with a little spice.

Meredith Wild is a #1 New York Times, USA Today, and international bestselling author. After publishing her debut novel Hardwired in September 2013, Wild used her ten years of experience as a tech entrepreneur to push the boundaries of her “self-published” status, becoming stocked in brick-and-mortar bookstore chains nationwide and forging relationships with the major retailers.
In 2014, Wild founded her own imprint, Waterhouse Press, under which she hit No. 1 on the New York Times and Wall Street Journal bestsellers lists. She has been featured on CBS This Morning, The Today Show, the New York Times, The Hollywood Reporter, Publishers Weekly, and The Examiner. Her foreign rights have been sold in over 20 languages.
Living on Florida’s Gulf Coast with her husband and three children, she refers to herself as a techie, whiskey appreciator, and shameless sun worshipper. Find out more about what projects she’s working on next at www.meredithwild.com.
Social Media Links
Facebook: www.facebook.com/meredithwild
Twitter: www.twitter.com/wildmeredith
Goodreads: www.goodreads.com/meredithwild
Instagram: www.instagram.com/meredithwild
Pinterest: www.pinterest.com/wildmeredith